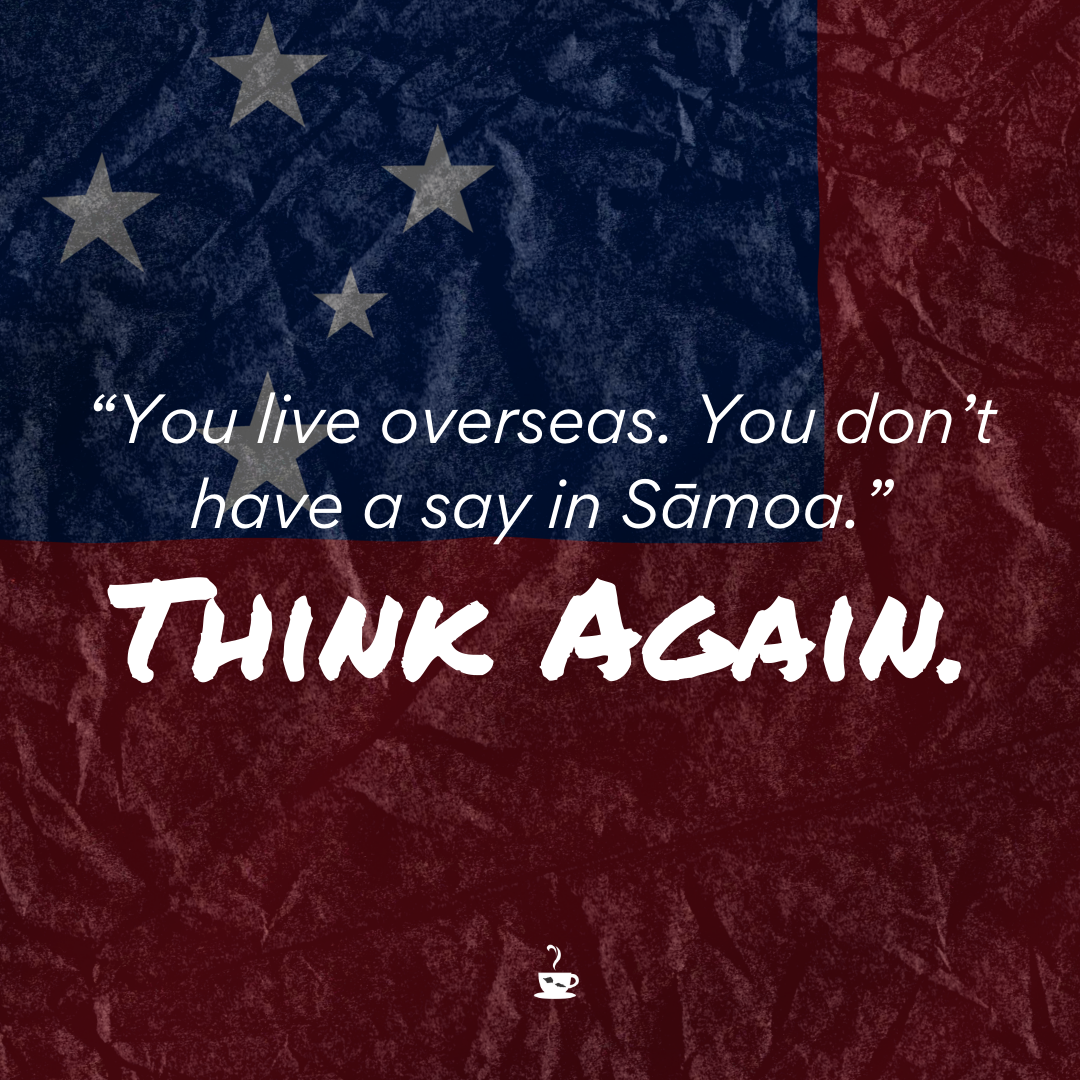 One boat returns from the catch; the other is tied to the shore; the third is resting in the boat shelter.

This was written in the 50th anniversary history book about Samoa. It speaks about how Samoan are placed all around the world. A note made said this about the quote, “The boat returning from fishing refers to those who have travelled to other countries; the anchored boat refers to the chiefs, orators and young people; the third boat is likened to the old people staying at home. All play their part in maintaining Samoa as a proud independent nation.”

We all have a part to play in keeping Samoa true and strong. I have had a lot of people from the island recently tell me I have no right to say anything on the election that is being held. That since I live overseas, my interest in who wins doesn’t matter. However, I beg to differ. Since the Mau Movement, islanders around the world, Samoans around the world, have played a part in keeping our island safe. I may not have a vote, but I have a voice.

Something else that has come from that video is how little information is spread throughout the island. Who owns the newspaper? Who owns the tv stations? Who is in charge of the education? The government. And, the government right now does a great job at keeping sheep’s wool over the people’s eyes. This isn’t a democracy. It’s a dictatorship. I mean in a recent video the PM was seen saying that if any minister disagrees with him they should be fired. I mean how does that even make sense? Sure, they may say “independent” but what is happening under the tables? What threats are being made? Is it independent or is it coercion?

But, what we’re not going to do is block out Samoans who left the island, raised families overseas, and want to have a voice. That’s what we’re not going to do because that means you are sectioning off people who have rights to land. Land who does not belong to the government to sell to foreign governments. I’ve mentioned the history of Hawai’i, and how we can see what happened there. I’ve then been told not to compare Samoa to other countries or islands and that is so ignorant! To turn a blind eye to what has already happened and not see how it parallels is so ridiculous.

Our people aren’t dumb. I just think they are ill informed. This is why there needs to be more places of information in Samoa or ways to get information to the people. That’s why I turn to social media to spread this message in hopes that Samoans on the island will hear this cry from those of us overseas. I know there are some on the island right now to sent the message out to us and that is why we’re involved now. With only 2-3 days to go, is this message too late? And, if so, what can we do?

But, if we are just in time, what do we do? We hold those politicians accountable. We ensure that they keep to their word, that we see where funds go, and we ensure that our customary lands are safe.

This election is going to be a turning point for Samoa. Will still be Samoa or will we become Samoa a territory of ___________? And, that is the real question that needs to be answered.

*By the way, these are all opinions of my own.